‘The POWER of Art’, Art Competition

In 2021 two Year 10 classes from Cherwell School took part in workshops to support learning on ‘honour’-based abuse (HBA) – the students were then inspired to create artwork for OAC’s art competition, to raise awareness of HBA.

In summer 2019, girls from Cherwell School released a song and music video to raise awareness of female genital mutilation (FGM), breast ironing and female body rights. The video, For Every Girl, was released at the beginning of the school summer holidays when girls from practicing communities are at highest risk of FGM.

The students hope that the song will help to break the taboo surrounding practices like FGM and breast ironing – the song and music video aim to start conversations and raise awareness.

‘All of us who helped make the film are hopeful that this film will help raise much needed awareness of FGM and other harmful practices, and how we can help to end them’ – Laura, Filmmaker

In summer 2019, students from Cherwell School partnered with Oxfordshire arts charity, Cowley Road Works, to create a processional piece for Cowley Road Carnival in Oxford. The project was funded by the Oxford University Physics Department who were keen to explore whether artistic projects helped young people to learn.

The theme of the carnival was Space! Our team created a ‘galactic mother of the universe’! The structure is a space-like pregnant lady representing femininity and natural diversity in the female body.

Our Youth Wing were fortunate enough to work with artist Emma, a professional costume designer who makes processional pieces for carnivals, political demonstrations and events all around the world. Emma helped the team create an incredible processional piece and our mother universe towered proudly above the crowds at the carnival!

Our Youth Wing ran a stall at the One World Fair in November 2017, raising awareness and selling Christmas cards and lavender bags.

In the Pink song

Young champions took part in the filming of a song, written by In the Pink, a local group of female student a cappella singers. The song, Together We Stand, calls for solidarity from all communities to help end the practice of FGM. The song attracted local TV interest.

Oxford Against Cutting is proud to be working with students from Cherwell School who have joined our Youth Wing and offered their time to help with awareness-raising, fundraising and events. The Youth Wing have set up their own Twitter and Instagram accounts: the youth Twitter is @OAC_YouthGroup. Instagram is @OxfordAgainstCutting_YouthWing.

Young champions participated in our event in February 2017 to raise awareness about the services of the Oxford Rose Clinic.

A champion who took part in making the song, My Clitoris, and professional film-maker, Stephen Fontaine, attended Integrate UK’s conference in December 2016. At the conference, the young champion presented Are You Ready to Know before it was screened for the Bristol audience.

Are You Ready to Know Event

Cherwell champions took part in a workshop for the film studies team to plan and prepare for the launch event for their film, Are You Ready To Know. The event included talks by survivors of FGM and Dr Brenda Kelly, the Founder and Director of the Oxford Rose Clinic and OAC’s Patron. The film-making team hosted the event, with young champions giving talks and taking the role of MC. In the Pink performed songs about empowerment, including the song they have written for Oxford Against Cutting, Together We Stand. The event attracted some 60 people and was covered in an article in the Oxford Mail, which was subsequently shared on social media by the End FGM Guardian Global Media Campaign.

Young champions from Cherwell School helped create our film, Are You Ready to Know?. Eight champions, aged 13 and 14, both girls and boys, took part in a series of workshops to create a film to demonstrate how parents can talk to young children about FGM. Together with students from 3 other schools, the film-makers learnt about FGM, advocacy, storyboarding, interviewing, filming and editing, before creating their own film. The team was given full control over the film content and all the editing decisions. The course was facilitated by Kate Agha and Fatou Ceesay from Oxford Against Cutting, together with professional film-maker, Stephen Fontaine.

Oxford Against Cutting has collaborated with the charity, Integrate UK, and a youth champion from year 9 has helped with their new song, My Clitoris. She has a beautiful singing voice!

Representing Oxford Against Cutting at the Home Office

Young champions from year 9 represented Oxford Against Cutting at an event organised by the FGM Unit at the Home Office. “Ending FGM: A Forum to Make a Difference” was a high profile event in London on 1 December 2016 and the speakers included the Home Secretary and representatives for Youth for Change and the Orchid Project.

Training ‘In the Pink’

Young champions from year 9 joined OAC directors to facilitate training for a local group of a cappella singers, In the Pink. The training session in November 2016 helped the musicians understand the impact of FGM on families. In the Pink has nominated Oxford Against Cutting as their charity of the year.

The two champions went on to facilitate an arts and advocacy workshop for young people on 25 February 2016. The champions showed the group a film and facilitated discussions about FGM. The group then created a banner for Oxford Against Cutting. 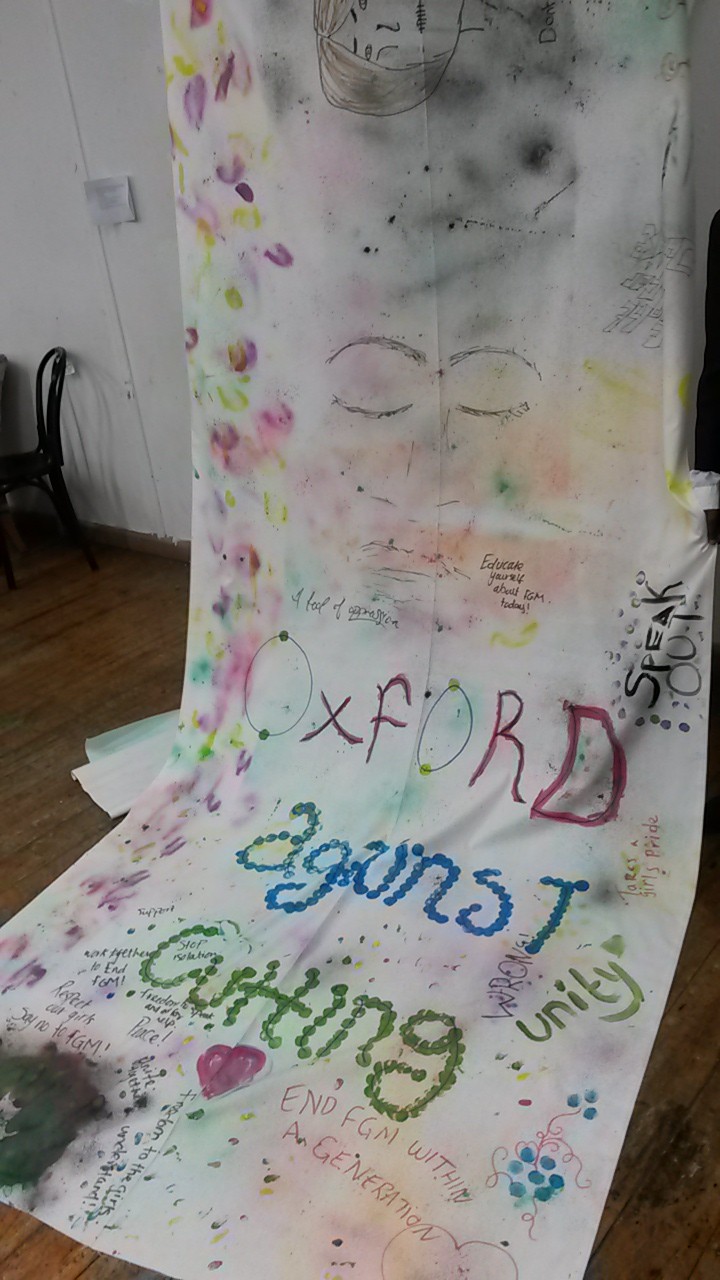 Two Year 9 students joined the Oxford Against Cutting team to attend the Integrate Bristol conference where they learned about the work of young anti-FGM champions in Bristol.

Anti-FGM champions at Cherwell School have continued spreading awareness by creating their own film. Well done to the team who worked completely on their own with no help from any adults! View the film at:

Students from Year 8 also joined Cheney School students in presenting at a high-profile conference about FGM sponsored by the Department of Health, in Oxford on 19 March 2015. The young team explained how professionals and peers can use the booklet about FGM they have created, showed the audience some of the winning artwork from the anti-FGM art competition and talked about the feelings of a survivor of FGM. The conference was attended by some 220 people. Clare Robertson, Consultant Community Paediatrician and an anti-FGM strategy lead in Oxford said “It was a brilliant way to end the day and very powerful to see young people being such effective anti-FGM Champions”.

The project was designed to give students another “product” they can use to talk about FGM with peers.

The workshops were led by a human rights activist and a professional actor. Students learned about issues around FGM, awareness-raising/campaign work and participated in a play reading. They also met a survivor of FGM who talked about the difficulties in “speaking up” and then created some improvisation work based on her story and artwork as visual stimuli.

The students performed the play reading and improvisation at the North Wall Arts Centre on 27 May 2015 to open the art exhibition.

Anti-FGM champions from Cherwell School took part in Oxford Against Cutting’s schools booklet project. Students from year 8 and year 10 formed a committee with students from Cheney School to create a booklet about female genital mutilation. The booklet will help professionals start conversations with girls at risk of FGM. During the project, the students attended a series of workshops to learn about FGM and campaigning skills and create the booklet. They wrote the text for the booklet and ran an art competition, setting the criteria, deciding on the themes and judging the final artwork.

The artwork from the competition was also displayed at an exhibition at The North Wall Arts Centre in Summertown, alongside the work of professional artist, Jeroo Roy. The exhibition ran from 27 May until 12 June 2015.